back to blog
February 25, 2015
21 tools behind the success of King and Halfbrick Studios
byDimitris MichalakosinTools

King and Halfbrick Studios are some of the most successful mobile game developers. Their best-selling games, i.e. Candy Crash Saga (King) and Fruit Ninja (Halfbrick), rate in the 100M – 500M download tier on Google Play and rank among the Top 100 on iTunes. Did you ever wonder which tools they use and how they compare? Do they use the same SDKs available to the rest of us mortal developers and what can we learn from their tooling choices? 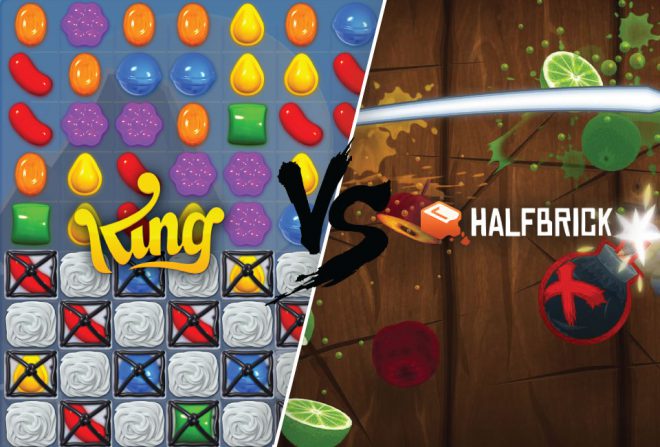 We analysed 39 apps (iOS and Android) from King.com and Halfbrick Studios to determine which SDKs they are using and what tools makes them tick. We ‘ve broken down the results by tool sector for easier comparison. Note our analysis technology is still in beta, so let us know how we can improve it.

Let’s consider these tooling choices one sector at a time.

Starting with Ad Networks, you can tell HalfBrick Studios employs a handful of tools, while King uses only the major networks of each platform, i.e. Google Ads (Android) and Apple iAd (iOS). This is indicative of the reliance of the two companies on ad revenues. King has long abandoned advertising as a revenue source with a clearer focus on in-app purchases.

Bear in mind it is quite common for app developers to use multiple ad networks. If demand is not met by the first network’s supply, you move to the next network and so forth until you find a medium to display. That is why Halfbrick Studios uses multiple ad networks, and indeed they have chosen high performance networks.

Halfbrick Studios using AngularJS, a popular JavaScript MV* framework, might strike as a surprise. What does JavaScript have to do with Fruit Ninja and Jetpack Joyride? Digging a bit deeper we discover Halfbrick is using web technologies to implement BrickNet – a service that allows transfer of scores and saves across multiple devices. The BrickNet service is bundled with all the company games we examined.

Regarding user analytics, we were unable to detect any SDKs on King’s games. They could be using a custom in-house solution, or an unknown-to-us tool.

Halfbrick Studio uses the notorious Google Analytics in combination with Kontagent (rebranded as Upsight), which is better positioned for mobile games. The takeaway here is that the most popular tool of the category, i.e. Google Analytics, works perfectly for top as well as indie developers. [tweetable]The difference is in not in which tool you use, but how you use that tool[/tweetable], i.e. how do you interpret the analytics data and use it to grow your company.

While Halfbrick Studios uses all the popular western social networks, King is more picky. They don’t seem to like Twitter, at least on the apps we found in the US stores. They do however use KakaoTalk on the iOS version.

So, this wraps it up. What did you learn from the tooling choices of King and Halfbrick studios? Is there anything we missed? Want to see more of these tooling deep dives? Leave a comment below and let us know.