back to blog
July 29, 2013
Websites vs Web apps: What the experts think
byCiprian BorodescuinAPIs 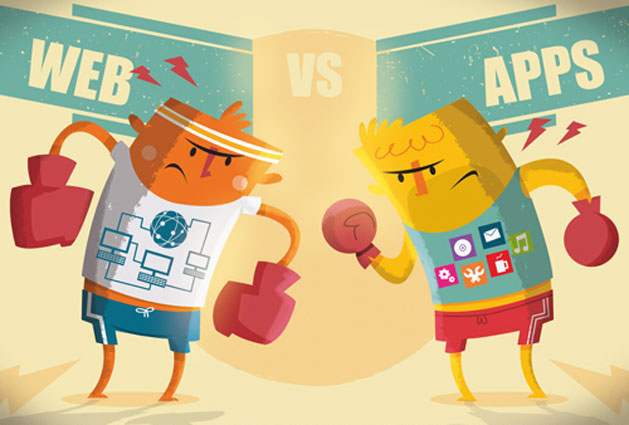 Definitions of web sites vs. apps

Web sites are so deeply embedded into our daily culture that it is impossible to imagine life without them. Even as a developer, I find it hard to remember the times from my childhood when my chubby little hands didn’t yet know how to type. In the last two decades, the Internet has grown, expanded, exploded and became impossible to ignore, making any keyboard without an Internet connection pretty much useless.

In the last few years, the web brought with it a new term that can be exciting and confusing at the same time: “web app”. But what is a “web app”, how does it differentiate from a “web site” and why does it matter?

Understanding this difference ultimately makes us better users or developers? Is a business going to blossom just by marketing its online presence as a “web app” instead of a “web site”?

The difference between Web sites and Web apps

In the pre app store era, the word “applications” had been applied to Web sites that provided advanced user interactions and capabilities previously available only through installable software. Early examples of web applications include Webmail, Google Maps and Google Docs. Compared to the classic web, i.e. blogs and news sites, web apps provided a richer user experience and access to advanced browser capabilities.

Today single-page web sites might still be referred to as web apps, but it’s more about the task focus than the technology itself. From this perspective, as Christian Heilmann explains, “The use case of an application is always to DO something with it”.

The task centricity of web apps is easier to understand if you think of smartphones or tablets: an app’s purpose is to achieve a specific task, like making a call, checking your email or finding a taxi nearby.

For developers, it is easier to draw the line between web sites and web apps if we think of the technical distinctions. Web apps have some defining attributes that bring them closer to their native counterparts:

Mozilla’s Christian Heilmann argues that the offline attribute is not a technical necessity in terms of definition, but rather a crucial usability distinction:

“Seeing how flaky our connections are – I am writing this on a plane – our apps should make people as effective as possible and this means we shouldn’t be dependent on a connection. The interface should be usable whilst we are off the grid and sync as soon as we go online”.

But how can we explain the difference to non-technical users? And, do we need to?

According to Dominique Hazael-Massieux, a Web site can be presented as a Web app as long as users consume it in a similar way they do a native app. If it’s exposed as an iconified app and used for a specific task, it shouldn’t matter whether it’s contained in the browser or installed via an app store. Facebook’s James Pearce outlined a few possible vectors that need to be considered when differentiating between Web sites and Web apps. I‘ve summed up his arguments:

Pearce asserts that read-only interaction should be classified as a site, but this criteria is not sufficient to distinguish between web sites and web apps. We still have cases like Flipboard (clearly oriented towards consumption) or Twitter and Facebook (with entirely user-generated content) that do not fit in any box.

Since both web sites and web apps can be launched by entering a URL into a browser or from a home-screen icon, this is clearly “not a reliable way to distinguish between web apps and web sites” according to Pearce.

Visual pizzazz is an important argument, one that users might particularly relate to, but is also a fuzzy boundary. What if my site displays a fixed toolbar, but no back button? What if my list appears as hyperlinks instead of ‘tappable’ items? What if I use plain scrolling instead of smooth fancy bars?

In the case of single page webapps, is SEO the price to pay when choosing to give the browser far more autonomy and responsibility and take advantage of its HTML5 APIs like storage? Do Web sites have SEO capabilities while Web apps don’t? We are back to explaining the differences between the two by using technical terms.

Should you be building web apps or web sites?

This question might be regarded as a technicality with a pinch of marketing to spice it up. This reminds me of the “HTML5 is ready” contest by Sencha that was announced a few months back, encouraging developers to draw inspiration from native apps and create similar web apps that show off the capabilities of HTML5.

The creators of the competition correctly argued that “the mobile web is the most fertile ground for leading edge web development because it doesn’t have the legacy of the older internet explorers that the desktop does. You can start your development with the assumption that your app or your content will be used in a fairly recent browser, so you can take advantage of a whole host of features like Canvas, inline SVG, HTML5 video, CSS3 styling etc. that bring the experience alive for the user”, as Sencha’s Michael Mullany explains.

Would it be safe to argue in favour of building web apps instead of web sites especially on mobile? Mobile users perform specific tasks on their devices, so a web app that offers the same experience as a specialised native app might gain more interest compared to a regular website.

Long term the distinction should not matter. According to FT’s Stephen Pinches, it really doesn’t make any sense, on the long term, to speak about the future of the mobile web: “there shouldn’t be “mobile” and “desktop” but simply good, user-centered design, which adapts and responds to the screen size and features of the device upon which it is displayed. However, on short to medium term, there is a need to differentiate and ensure the user experience is as good as possible on a given device.”

The ‘app-ification’ of the Web

Whatever your preference may be, there is an increasing number of mobile developers targeting web apps. Based on VisionMobile’s latest Developer Economics survey of 6,000+ developers, already 23% of HTML5 mobile developers develop web apps, compared to 38% who develop mobile websites.

With browsers increasing support for device APIs, and with a growing number of developers going direct to native with PhoneGap, Icenium or Appcelerator, or even with the recently launched Firefox OS, the web world is clearly moving in the direction of apps.

As Sir Tim Berners-Lee said in 2012, “the solution is in your hands: develop web apps!”