Augmented Reality (AR) is about overlaying pieces of a virtual world over the real world (in contrast to Virtual Reality (VR) that is about replacing the real world with a virtual one). On mobile devices, this simply means enhancing what you can see through the device’s camera with multimedia content (e.g. you can point your camera at a movie poster and watch its trailer, or you can point it at a star in the sky and learn its name). So, basically [tweetable]AR comes down to the following three fundamental questions: where to display what and how[/tweetable]. 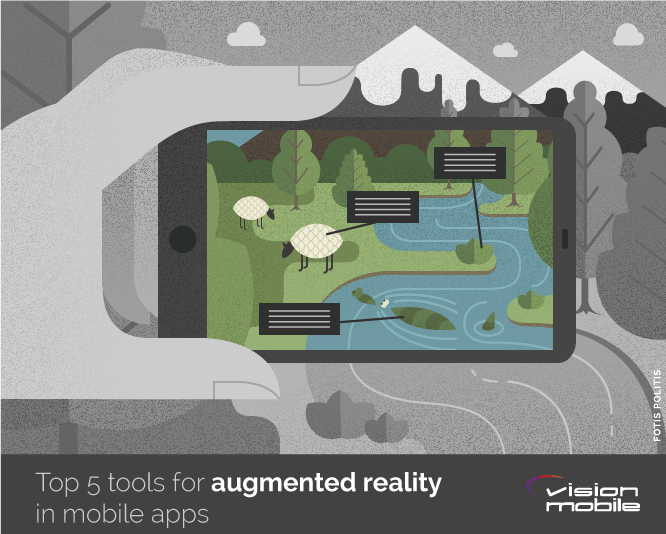 But first: which are YOUR favourite tools? Take the Developer Economics Survey and you could win new, amazing gear.

On the other hand, the what and the how might leverage 3-D model rendering, animations and gesture detection. In general, the what can be any piece of digital information (e.g. text, image, video) that the user might also have the ability to interact with (e.g. rotate or move it).

Let us now present five of the numerous AR tools that exist at the moment and that can be used to develop apps for smart-phones, tablets or even smart-glasses. The following table contains information about the license(s), under which each one of these tools is distributed, and the platforms that it supports.

* There is also a free trial available.

Image (multi-)detection and (multi-)tracking, 3-D object rendering in real time, as well as user interaction with 3-D objects (e.g. selection, rotation, scaling) are some of the features that ARPA SDK offers for building AR apps on iOS and Android. ARPA GPS SDK complements ARPA SDK with geolocation-based AR functionality: it allows you to define your own POIs that, when detected, the user can select them and get more information about them or even perform actions on them (e.g. the “take-me-there” action that displays a map with directions to the selected POI). ARPA GLASS SDK and ARPA Unity Plugin offer similar functionality with ARPA SDK for Google Glass and the Unity game engine, respectively. It is worth noting that Arpa Solutions, the company behind these SDKs, have over the years developed their own AR platform, some of the features of which (e.g. face recognition and virtual buttons) might at some point be transferred also to the SDKs.

With AR Browser SDK you can add and remove POIs independently from the scene in real time, interact with them (e.g. touch them or point the camera to them) and perform actions on them (e.g. send SMS or share on Facebook). Image Matching SDK allows you to create your own local matching pool with thousands of images (loaded both from local resources and remote URLs), and use it to match any image without any connection to the internet, while it also supports QR code and barcode recognition. Except for these two SDKs, ARLab will soon launch Object Tracking, Image Tracking and Virtual Button SDKs. All SDKs are available for both Android and iOS.

DroidAR is an open-source framework that adds location-based AR functionality to Android apps. Gesture (e.g. full turn) detection, support for static and animated 3-D objects (using the model loaders from the libGDX game development framework) that the user can interact with (e.g. click on them), and marker detection are part of the functionality that DroidAR offers and that is only shaded by the poor documentation that exists for the project. There is a section on the project README file on GitHub that gives an overview of a closed-source version of DroidAR, DroidAR 2, which seems to have some interesting enhancements compared to its open-source counterpart (e.g. SLAM tracking and a jMonkeyEngine plugin).

Multi-target detection, target tracking, virtual buttons, Smart TerrainTM, and Extended Tracking are some of the features of Vuforia SDK. Vuforia supports the detection of several kinds of targets (e.g. objects, images, English text). Especially for image recognition purposes Vuforia allows apps to use databases that are either local on the device or in the Cloud, The platform is available for Android, iOS and Unity. There is also a version of the SDK for smart glasses (namely Epson Moverio BT-200, Samsung GearVR, and ODG R-6 and R-7) that is currently moving to its beta phase and is open for early access applications from qualified developers.

There are apps that allow a museum exhibit to tell its own story, that help you decide which furniture looks better in your living room, that bring an elephant you just drew on a piece of paper into life, or that warn you about all the signs you ignored while you were driving. These are examples of already available apps that provide some sort of AR functionality. So, pick one of the AR tools we described above (or one we didn’t, e.g. AndAR, ARmedia SDK, BeyondAR, mixare) and use it to integrate AR in your own apps.

Read more about the differences between AR and VR!

What do you like or hate about these tools? Take the Developer Economics Survey and win new, amazing gear.