back to blog
September 18, 2014
The 3 key Apple Watch features that nobody talks about. Yet.
byStijn SchuermansinBusiness

[If Apple wants to create a new, large product category out of smart watches, they need to create mass-market demand for their new product. What are the 3 most important features that will define the future of the Apple Watch? The ones that enable developers to innovate on top of these devices and create demand for smart watches.]

“We believe this product will redefine what people expect from its category. … It is the next chapter in Apple’s story.” With these words, Tim Cook made it very clear that the Apple Watch is more than just an excellent product. As with the iPod, the iPhone and the iPad before it, the Apple Watch aims to shape the future of wearables and create a whole new market reality.

As it stands, the Apple Watch v1 is a nicely designed timepiece, an engineering wonder, but competition will be fierce. Since fashion is about self-expression, by definition, there will be no single winner.

If Apple wants to create something bigger than fashion accessories, the Watch needs to be a functional tool. If it’s a tool, [tweetable]Apple must answer a fundamental question: what is a smart watch for?[/tweetable]

A lot of kitchen-sinking in the Apple watch. Much like the iPad launch. It's a piece of glass that be be anything, but what in particular?

Will notifications become the killer app for smart watches? Unlikely. Not only is it unclear that we really want more interruptions, but it’s a bit of a dead-end for innovation. There can only be so many improvements in notifications, and only so many companies making those improvements.

If Apple wants to create a new, large product category out of smart watches, they need to become something much more that a timepiece with notifications and sensors. Something that allows people to do things that were not possible before. How Apple can do this? By following the same path that worked so well for iPhone and iPad: Tap into the limitless innovation power of co-creators to discover new use cases and possibilities we cannot imagine today.

The most important features of the Apple Watch going forward are the ones that enable developers to innovate on top of these devices and create demand for Apple’s smart watches. What are these features? 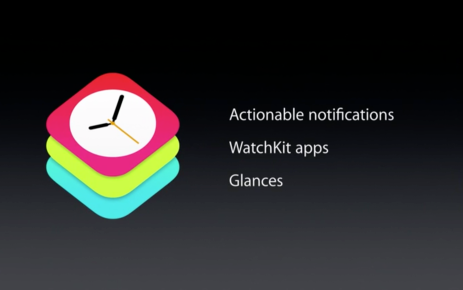 The straightforward way to expand the functionality of the watch is the WatchKit SDK, which allows developers to create “watch apps”. Other smart watch players like Android Wear, Pebble and Razer have made similar capabilities for developers. Developers are already showing strong interest in smartwatches. For example, the developer program of Pebble boasts 20,000+ developers and thousands of apps,.

But a few sensors and apps do not make a platform. The real potential lies in the HealthKit SDK that Apple launched at its WWDC event earlier this year. While its not technically a feature of the watch itself, it is this SDK that can take the device’s functionality and expand it in a whole new way to monitor activity and other wellness data . Could it be that the category that Apple wants to redefine is not the watch, but wellness and healthcare (in the broadest sense of the word)?

Certainly several other companies seem to go after that opportunity. Among them Google (Google Fit), Validic, Samsung (SAMI), Human API and most recently Jawbone (Jawbone UP API).

Like the Nymi wristband, the Apple Watch has all the technology in it to identify you personally. Apple has already demonstrated how digital identity combined with the Apple Watch can be used to make payments or even open hotel doors. (The clever integration with the new Apple Pay can drive adoption for both.) However, the possibilities are much broader. Biometric identification can be the end of not only passwords, but other kinds of ID as well. Another product category for Apple to redefine and absorb into its iOS universe?

Digital identity is a key control point for many digital leaders, including the likes of Google, Facebook, Twitter, LinkedIn and Salesforce. They are all actively working to hold your identity information and build your online persona on their platform. For Apple, the importance of identity is also evident in their deepening integration between devices and in their introduction of fingerprint sensors in all new phones.

What is a smart watch useful for? Beyond fashion and self-expression, a new kind of health monitoring and identity are prime candidates for the title of killer use case. Apple is going at it with their proven recipe for launching digital ecosystems: users-first. Apple starts by releasing a well-designed device for hardcore fans with a lot of value built in by default. Once there is a critical mass of users, Apple connects them with developers, who create real mass-market demand for the product.

It will take the ingenuity of a community of developers to explore all the possibilities and create a category killer, and Apple knows it very well.